Did you know that there is a 100% natural solution that is highly effective in relieving ear pain in case of otitis? Discover this natural painkiller and stop suffering needlessly while waiting to see the doctor.

We promise, we won’t suggest putting leeks in your ears or making potions out of witch hair… The natural painkiller that you will discover in this article is the result of scientific research and is patented. It is as pleasant to use as it is effective against pain, and that’s saying a lot! But first, here is some practical information about ear infections: what they are, how they can be detected and what usually causes them.

What is an ear infection?

An ear infection is an inflammation of the ear that is very common in children, but can occur at any age. It is usually very painful… That’s why worried parents who are experiencing a difficult moment or night want to try to relieve the symptoms as quickly as possible, without medication, until they see the doctor!

What causes an ear infection?

The most common causes of an ear infection are complications following a cold or after swimming.

Otitis after a cold

In children between six months and three years old, the immune system is still immature. And in young children, the Eustachian tube (the small tube that connects the ears to the nose) is narrower than in adults. In the event of a cold, this small duct has more difficulty draining the fluid (especially since children often have trouble blowing their noses) and this leads to an infection. When the infected fluid gets behind the eardrum, bingo: you have an ear infection.

Parenting tip: when your child has a cold, don’t hesitate to put salt water in their nose and, for younger children, to use a nose pump to regularly empty the nasal passages! The cleaner your child’s Eustachian tube is, the less chance there is of an ear infection developing.

Infant ear infections can easily go undiagnosed and undetected, which is undesirable. Usually, when a newborn has an ear infection, he or she is feverish and irritable. Their sleep is disturbed and they may pull their ears.

There is a common misconception that teething can cause ear infections, but this is not the case… It’s just that a teething child tends to put everything in their mouth to relieve the pain and therefore ingests more bacteria and viruses during these complicated times.

Parenting tip: consider attaching a teething ring to your absorbent baby bib to prevent the toy from getting contaminated by falling on the floor regularly!

Swimmer’s ear (also called otitis externa) usually affects only one ear and generally occurs when your child has been swimming (either in the summer or at the pool). What happens in the case of swimmer’s ear is that the ear canal has accumulated water from swimming and a small amount has remained in the ear.

Parenting tip: Avoid swimming until the swimmer’s ear infection has healed. And, to prevent future ear infections, after swimming, advise your child to tilt their head to get all the water out of each ear!

How can you know if it’s an ear infection?

In addition to the obvious symptoms, such as a child complaining of ear pain or a toddler pulling their ears repeatedly, an ear infection may be accompanied by:

When in doubt, follow your instincts and go see your doctor to be sure!

Whatever the cause of an ear infection, it is possible to effectively relieve the symptoms of an ear infection thanks to a natural pain reliever that has been proven to work for over 20 years around the world: the Béké-Bobo therapeutic teddy bear.

How does the therapeutic teddy bear relieve ear pain?

When heated or cooled, the therapeutic teddy bear naturally relieves pain, thanks to the moisture it releases.

This truly magical bear is a small pouch filled with a patented, top secret cereal blend inserted in an ultra-soft, comforting—and washable—minky fabric cover. In the case of an ear infection, the teddy bear should be used cooled.

How to use the Béké-Bobo bear

To cool the therapeutic teddy bear to soothe an ear infection, first place it in the freezer for two hours in an airtight bag. To avoid being caught off guard, you can simply store it in the fridge so that it is always ready to be used in case of ear pain.

Press the teddy gently against the painful ear for at least two minutes. Then put the teddy back in the freezer and repeat every two hours.

Effectiveness and other uses

This natural painkiller really works… That’s why one in three families in Quebec has one at home! The therapeutic teddy bear can also be used to relieve a multitude of other small and big booboos, such as teething, colic, stomach aches, menstrual cramps, sprains, breast congestion, styes and much more. Discover this little marvel of a bear without hesitation!

Remember to give your child lots to drink, especially if they have a fever! We tend to dehydrate more quickly when we sweat because of a high temperature or because the ear infection is accompanied by diarrhea.

If the pain is acute, you can also supplement the treatment with paracetamol. But be careful, avoid putting drops or any other liquid in the ear, because if the eardrum is cracked or pierced, you could cause irreparable damage to your child’s ears.

Whatever happens, go see your doctor!

To avoid any complications, even if you manage to soothe your child’s ear pain effectively, we strongly advise you to go see your family doctor as soon as possible. It is always a good idea to get the eardrums checked. In most cases, otitis heals on its own within 48 to 72 hours, but it is best to make sure that your child does not need a course of antibiotics!

The magic routine to put baby to sleep

To increase baby’s sense of security and ease their anxiety, it is important to set up a bedtime routine ...

Constipation in children is very common—and yet, it sometimes takes a while to be diagnosed and therefore, treated—because its ...

The benefits of moist heat

Thermotherapy is recognized around the world as an effective treatment for muscle and joint pain. When used warm, the ... 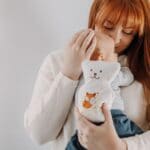 How to use the therapeutic teddy bear

You’ve adopted the Béké-Bobo teddy bear and you’re ready to discover its incredible virtues? Here’s everything you need to ...